Back to all posts

How Liquidity Ratios Can Simplify Your Stock Analysis 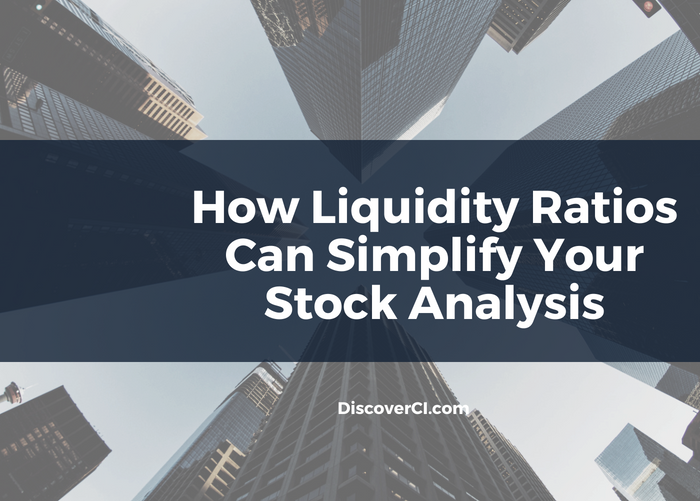 Liquidity ratios provide a huge bang for your buck when analyzing a potential investment in a stock.

In fact, by analyzing these ratios when you begin your stock analysis you can weed out stocks with low upside, before you dive into completing a full financial ratio analysis.

Better stock analysis and more time on your hands. It's a win-win!

Those are all good questions, which we will answer in this post. So let’s get down to biz (business, biz means business).

Our deep dive into these ratios begins at a logical place - the definition of liquidity ratios.

Liquidity ratios are metrics used to examine a company’s ability to pay for amounts due within one year of the reported financial statement date. Poor ratios would indicate a company is overextended, and may have issues paying their bills in the near-term, much less investing in future growth!

To understand the purpose of these ratios and why they are important, let’s travel back in time to the credit crisis. The good old days when banks were lending to everyone with a pulse, and companies were leveraged up to the gills.

If you looked at most people’s personal financial statements, the liquidity ratios would have looked terrible, and they would have foretold the impending housing and market collapse.

Because the amounts Americans were paying on their mortgages, credit card debt, student loans, and other borrowings was far outpacing the amount those people had in assets or were bringing in from their day jobs.

As monthly payments became due, they didn’t have the cash sitting in their bank accounts, or the cash coming in from their jobs to make these payments.

That’s it folks, just like in personal finances, a company can’t survive when they are over extended and over their skis in debt.

These ratios can be a quick tool for performing financial analysis and fundamental analysis that lets you know if a company is well positioned to invest cash and pay their obligations, or if the company is scraping by and borrowing from Peter to pay Paul.

Now that our understanding of the overall principle of these ratios is clear, we can start looking at the different types of ratios and the formulas for these ratios.

There are three main ratios that fall into the liquidity category that most investors use when they are analyzing a stock.

We’ll start with taking a look at the Current Ratio.

A company with a current ratio that is higher than 1 may be worth looking into further, but generally you would like to see a company’s current ratio closer to 1.5 or above.

I would give a hard pass to any company with a current ratio below 1, as this tells you that the company’s current assets are less than their current liabilities, and the likelihood of that company surviving, much less thriving, starts to dip.

One problem that you run into with the current ratio, that the quick ratio attempts to solve, is that the current ratio assumes that all of a company’s current assets can be converted into cash within one year to meet their short-term obligations.

However, this assumption is mostly untrue!

There are certain items that are grouped within current assets on a company’s balance sheet that are less liquid than cash, securities, and A/R, which may take longer to convert to cash. Inventory and prepaid expenses are usually grouped into current assets, but can have a longer cash conversion cycle than one year.

Generally a quick ratio of at least 1 indicates that a company has solid liquidity.

*One side note, if you hear someone use the phrase Acid-Test Ratio. They are talking about the Quick Ratio. It’s calculated the same way, but just has a cooler name.

The cash ratio is the most conservative of these ratios, and is calculated by taking a company’s cash, plus marketable securities, and dividing the total by the company’s current liabilities.

The cash ratio removes amounts due from customers (i.e., Accounts Receivable), which was included in the Quick Ratio, to only calculate the company’s ability to pay its current obligations with the cash it has on hand.

This ratio is conservative, as it is calculating whether a company could pay its current obligations in the event they weren’t able to convert any outstanding Accounts Receivable, Inventory, Non-Trade Receivables, etc.. into cash (a scenario that is unlikely).

A cash ratio greater than 1 would indicate a company is holding a lot of money in the bank. Most companies have a cash ratio between 0.15 and 0.30.

We’ve summarized the remaining ratios below (including the ones we covered above) so you have a complete list of ratios and formulas to refer back to when you are completing your fundamental analysis.

These ratios will give you a good idea of whether a company is managing its cash efficiently, and whether the company has liquid assets to pay off obligations, or re-invest into growth.

Each ratio provides insight in its own way, but generally, the higher the ratio, the more confidence you can have in a company’s current ability to pay its short-term obligations.

The Power of These Ratios in Your Stock Analysis

Liquidity ratios are a key piece of the overall fundamental analysis puzzle.

If a company's ratios indicate their liquidity levels are low, this could be a signal that trouble lies ahead, and the company may have difficulty continuing its operations. Needless to say, this is not a company that would pass our high standards and warrant an investment.

Using the ratios we’ve covered in this post can be a quick way of eliminating low performing stocks from further, more time consuming analysis.

If you're interested in finding stocks with optimal liquidity ratios, check out our article that walks through the process of using a value stock screener to identify investment ideas.

We've got you covered: Get Your Free Finacial Ratios Cheat Sheet!

Subscribe to our email list today and receive our Financial Ratios Cheat Sheet, which you can use as a quick reference to the topics covered in this post!

Subscribe to our email list and get investing tips, strategies, and news straight to your inbox. Access all member-only content and be the first to know about new posts and updates from the DiscoverCI Team.

Read more: Back to all posts »